Posted on September 1, 2010 by giacintobutindaro 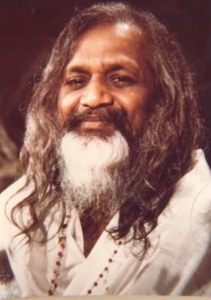 The Transcendental Meditation (TM) – which means to ‘meditate on the beyond’ and which has been renamed ‘the science of creative intelligence’ – is a Hindu meditation technique founded by Maharishi Mahesh Yogi (born in India around 1910). After graduating from Allahabad University in 1942 with a degree in physics, Mahesh became the disciple of the Indian religious leader Guru Dev, who instructed Maharishi to devise a meditation technique from the Vedas, which are part of the Hindu scripture. TM is a spiritual Hindu practice which is presented to the Western world as a scientific way of reducing stress and finding peace within oneself. TM is practiced while sitting with the eyes closed, and it involves breath control, concentration and the use of a sound, called mantra, that is repeated mentally in a particular way.

The purpose of the Transcendental Meditation is to unite the meditator with the absolute Transcendental Being, called God by Maharishi Mahesh Yogi. Who is the God of Maharishi Yogi? Is He the God spoken of in the Bible? No, he isn’t, for Mr. Maharishi affirms: ‘Everything in creation is the manifestation of the unmanifested absolute impersonal being, the omnipresent God’ (Maharishi Mahesh Yogi, Transcendental Meditation, p. 266); ‘This impersonal God is that being which dwells in the heart of everyone’ (ibid, p. 269); ‘Each individual is, in his true nature, the impersonal God’ (Maharishi Mahesh Yogi, Science of Being and Art of Living, Rev. Ed. 1967, p. 276). As you can see, according to Mr. Maharishi God is everything and everything is God, man also is God or part of God for he is God in his true nature (this doctrine about God is called pantheism); so his God is an impersonal God. Actually his God is nothing but Brahman which is – according to Hinduism – the ultimate reality: formless, inexpressible, both Creator and all that is created, which comprises both good and evil, life and death, health and disease. The aim of TM, therefore, is to realize one’s essential union with Brahman, that is, one’s inner divinity. When one realizes this union with Brahman, his mind loses its individuality and becomes a cosmic mind, it becomes omnipresent and reaches the eternal pure existence.

Transcendental Meditation is from the devil for the following reasons.

First, because TM’s purpose is to realize one’s essential union with Brahman, that is to say, its purpose is to attain one’s Godhood. Whereas the Holy Scripture teaches that man is just a creature of God and he can never become God or attain Godhood for he is part of God’s creation. God is the Creator, while man is a creature; God is a personal being (who sees, hears, speaks, etc. – and not an impersonal God – so man can know Him, talk to Him, have fellowship with Him) separate from His creation. So man is not to be identified with God. It is evident, therefore, that TM’s is harmful, for it deceives the meditators into believing they are God, and those who believe they are God are God’s enemies for they are full of pride.

Second, because TM’s purpose is to induce the meditator to contact demons (that is, to see demons, to talk with them, to invite them in his life), which are evil spirits which live in the air and are ready to hurt people by oppressing or possessing them. These demons are the Hindu deities such as Brahma, Vishnu, Shiva, Krishna, Sarasvati, which the meditator is encouraged to invoke by repeating mantras. A mantra is a sound symbol of one or more syllables used to induce a mystical state. It must be passed on by the living voice of a guru and cannot be learned in another way. One need not understand the meaning of the mantra; the virtue is in the repetition of the sound. It is said to embody a spirit or deity (mantras actually are names of Hindu deities that have been used by worshippers in India for thousands of years to obtain the ‘blessings’ of the various gods in the Hindu religion), and the repetition of the mantra calls this being to the one repeating it. Thus the mantra both invites a particular being (demon) to enter the one using it and also creates the passive state in the meditator to facilitate this fusion of beings. Therefore mantras are not meaningless sounds that bring about deep rest, as TM teachers say to the meditators, but words addressed to demons which are invited to enter the meditator. Hear what brother Rabindranath R. Maharaj, who was a guru before his conversion to Christ, experienced while repeating mantras during his daily transcendental meditation: ‘After the idol had been bathed and worshiped, we would all gather at about 5:30 A.M. to hear the Vedas read aloud in Hindi; then we would spend two or three hours in meditation. The first mantra assigned to me was Hari OM Tat Sat. The Brahmacharya would always begin his meditation with the repetition of the single word OM. The highest vibration and the most difficult to pronounce, like all mantras OM must be taught by a guru. In the Vedas it is said that: ‘On the lotus …. Brahma began to think: ‘By what single syllable may I be able to enjoy all desires, all worlds …. gods …. Vedas …. rewards….? He saw this OM …. allpervading, omnipresent …. the Brahman’s own symbolic syllable …. With it he enjoyed all the desires of all worlds, all gods, all Vedas …. all rewards, all beings …. Therefore the Brahmin who, desiring whatever he wants, fasts three nights, sits on sacred grass facing east, and repeats this imperishable OM, for him all objects are realized and all acts are successful’. Nothing was more important than our daily transcendental meditation, the heart of Yoga, which Krishna advocated as the surest way to eternal Bliss. But it could also be dangerous. Frightening psychic experiences awaited the unwary meditator, similar to a bad trip on drugs. Demons described in the Vedas had been known to take possession of some Yogis. Kundalini power, said to be coiled like a serpent at the base of the spine, could produce ecstatic experiences when released in deep meditation – or, if not properly controlled, it could do great mental and even bodily harm. The line between ecstasy and horror was very fine. For that reason we initiates were closely supervised by the Brahmacharya and his assistant. During the daily meditation I began to have visions of psychedelic colors, to hear unearthly music, and to visit exotic planets where the gods conversed with me, encouraging me to attain even higher states of consciousness. Sometimes in my trance I encountered the same horrible demonic creatures that are depicted by the images in Hindu, Buddhist, Shinto, and other religious temples. It was a frightful experience, but the Brahmacharya explained that it was normal and urged me to pursue the quest for Self-realization. At times I experienced a sense of mystical unity with the universe. I was the universe, Lord of all, omnipotent, omnipresent’ (Rabindranath R. Maharaj with Dave Hunt, Death of a Guru, Hodder and Stoughton, Great Britain 1986, pages 56-57); ‘Often while I was in deep meditation the gods became visible and talked with me. At times I seemed to be transported by astral projection to distant planets or to worlds in other dimensions. It would be years before I would learn that such experiences were being duplicated in laboratories under the watchful eyes of parapsychologists through the use of hypnosis and LSD. In my Yogic trances most often I would be alone with Shiva the Destroyer, sitting fearfully at his feet, the huge cobra coiled about his neck staring at me, hissing and darting out its tongue threateningly’ (Ibid., page 75). As you can see, TM is very dangerous, it is the doorway to the occult. There is no doubt that through TM people can become demon-possessed or demon-oppressed. A former TM Initiator has stated: ‘I have seen meditation effects ranging from insomnia and headaches to more serious problems such as dissociation, involuntary jerks and twitches, and hallucinations. I even know of people who have needed to be institutinalized; they had no history or symptoms of mental illness prior to their involvement with TM’. So brothers and sisters in the Lord, beware of TM!

Now let me explain to you what the Bible says about meditation. A Christian must meditate, for the apostle Paul says: “Finally, brethren, whatever things are true, whatever things are noble, whatever things are just, whatever things are pure, whatever things are lovely, whatever things are of good report, if there is any virtue and if there is anything praiseworthy – meditate on these things” (Philippians 4:8 – NKJV). How does a Christian know which things are true, noble, just, pure, lovely, of good report, excellent and praiseworthy? By the Holy Spirit who dwells in him. He is truth. For instance, the Holy Spirit testifies that the Holy Scripture (that is, the Bible) is truth and so he must meditate on it; the Holy Spirit testifies also that the heaven, the earth and the sea and all that is in them is the work of God’s hands which testifies to His eternal power and Godhead, so it is good for a Christian to meditate on the work of His hands. Why must a Christian meditate on the things spoken of by Paul? In order to please God and to keep having fellowship with Him. A Christian must not meditate on these things in order to become one with God nor to come to the conclusion that he is God, for he knows that he is and always will be a creature of God separate from His Creator. A Christian knows that no matter how long he meditates on what is right and good, he will never become God nor will he come to the conclusion: ‘I am that Being who created all things’, for the Holy Spirit will keep him from thinking these evil thoughts. Rather we can say from experience that the biblical meditation will lead the Christian to realize that he is a worm, a weak and little being, so little and full of limitations in the sight of His Creator who fills and rules the universe. Therefore the biblical meditation will lead him to humble himself before God and not to exalt himself. The Christian, while meditating, can call upon the Lord, thank Him and praise Him; he has no mantras, that is, no magical formula to use, but only thanksgivings and praises which come out of his heart spontaneously. And these words make him feel, by the Holy Spirit who is in him, in close communion with His God, they make him feel His presence in a particular way in certain circumstances.

I am a minister of the Gospel, living and serving God in Italy
View all posts by giacintobutindaro →
This entry was posted in Abominations, Apologetics, Eastern practices, Induism, Maharishi Mahesh Yogi, Occult and spiritism, Rabindranath R. Maharaj, TM and tagged death of a guru, Maharishi Mahesh Yogi, Rabindranath R. Maharaj, TM, Transcendental Meditation. Bookmark the permalink.